The NY Times Green Inc. blog recently asked readers to provide some suggestions for an image makeover for nuclear power. I did not like the published responses very much so I submitted my own:

In 1991, I took a cruise with my wife and noticed just how much smoke was pouring out of the stack over our head as we were sitting on deck. At the time, I had just completed a three year assignment as the Engineer Officer of the USS Von Steuben, a powerful ship with an engine so clean it could operate while we were submerged. In addition to producing no emissions, the Von S ran for about 14 years without refueling. I want to share the image that the cruise inspired. 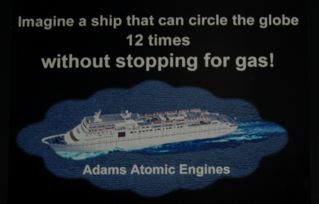 I hope that people like Bill Messina get a chance to meet and get to know some of the amazing professionals that I have worked with in my years associated with nuclear power technologies. His view of humanity might be significantly changed by the experience.

• How would you overcome the malingering and incompetence of workers who neglect important safety routines?

• How do you ensure that managers do not sacrifice safety to the bottom line? … [T]he managers at Indian Point have resisted shutting down the facility for repair, citing economic reasons, which puts the metropolitan area of New York at risk of a Three Mile Island incident.

• How do you insure that government regulators do not compromise the safety of citizens for political reasons? … I read an article 25 years after Three Mile Island where a government safety inspector said he pleaded with his superior to let people know of the danger. He was rebuffed.”