I attended a heart warming press event this morning that gave me the same kind of goosebumps that I feel when listening to the Star Spangled Banner after an American wins a gold medal at the Olympics. Considering the potential economic and environmental impact of the product that will be produced as a result of the announcement, that is probably a gross trivialization of the importance of the event.

Bechtel and B&W announced that they had formed an exclusive alliance called Generation mPower that will produce modular nuclear power plants, not just nuclear steam supply systems. The 125 MWe machines will be engineered, manufactured and licensed in the United States. They will be aimed first at the domestic market, but will also be engineered for the export market. The alliance is determined to eventually produce nuclear power plants that can be sold for a predictable price and installed on a predictable schedule.

Bechtel will be responsible for engineering the portion of the plant that converts steam supplied by the reactor into electricity – the part of the plant that nuclear engineers call “balance of plant”. Instead of putting together new teams for every project and bidding for various components, the alliance will produce plants that are identical copies. The description of the alliance and the desire to build plants that are carbon copies of each other sounded a lot like the way that Mike Wallace at Unistar has described his notion of a fleet of identical plants – though Mike’s fleet will be made up of 1600 MWe US-EPRs instead of 125 MWe mPower modules.

Aside: I realized while writing this article that there is a good reason why some of the terms used to describe Generation mPower sounded vaguely familiar. Both Bechtel and B&W are involved in the Unistar project to build a fleet of standardized large plants for US utility customers, Bechtel as a partner and B&W as a component supplier. End Aside. 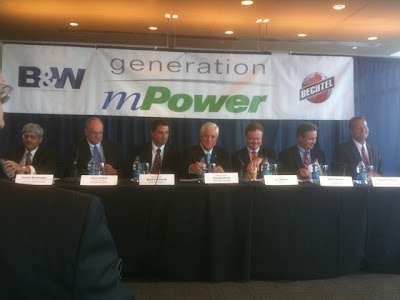 Christofer Mowry reminded the assembled audience that it had been slightly more than a year since B&W announced the mPowerTM at a similar press event held at the National Press Club in Washington, DC. The company has been busy during that year; there are now approximately 400 people working full time on the project and the team is expanding to include license preparation and balance of plant work.

During the event, I heard all of the good arguments that support development of smaller unit sizes. The speakers talked about better capacity addition scheduling as power demand grows, simpler financing with more moderate project size, higher overall reliability due to unit independence, factory production, easier shipments, and the notion that learning curves from a higher unit volume will help drive down costs over time. The utilities also mentioned the importance of smaller unit sizes as they make plans to replace aging coal fired power plants often built 40-50 years ago when unit sizes of 125-300 MWe were common.

Another major point of excitement was the fact that both Bechtel and B&W are American companies; there is a strong current of patriotism in the project based on the goal of restoring US manufacturing capacity and nuclear technology leadership.

Christofer Mowry provided a brief history lesson by pointing to the recognized success of the public-private partnership that built the Shippingport reactor and unleashed several decades of rapid nuclear power plant development around the world using American developed technology. Representative Davis talked about how the Tennessee Valley Authority had brought electricity to his home region and the beneficial effects from switching from burning wood and kerosene to flipping on light switches. Senator Webb described how he had been a nuclear supporter ever since his days at the Naval Academy as he watched many of the top members of the classes in his era join Admiral Rickover’s program.

(Aside: Mr. Webb was not always so complimentary in his novels and non fiction books of the impact of the engineering focus at the Academy that Rickover influenced. It is obvious that Webb, the author, was a Marine Corps officer; they often have a different notion about combat preparation compared to some of the more cerebral sections of the Naval service – like the nuclear submarine service.

Senator Webb, however, has supported nuclear energy developments and spoken frequently about the potential benefits to his goal of restoring the US manufacturing industry’s activity level. He is a reliable supporter for efforts that put Americans to work in productive enterprises that enhance our national security. End Aside.)

When asked about the length of time that the exclusive partnership would last,
Jack Futcher from Bechtel explained that the alliance does not have an expiration date – the word that he used was “perpetual”. I asked where the alliance would be located if it was eventually going to be a single entity, Christofer Mowry and Jack Futcher explained that the initial effort will remain focused in Fredrick, MD (Bechtel) and Charlotte, NC (B&W) with detailed nuclear steam supply system engineering remaining at B&W’s facility in Lynchburg, VA. I also asked if B&W intended to manufacture the mPower fuel itself; Chris Mowry indicated that the company certainly had that capability and experience but the decision was not yet made.

After the event had concluded, I spoke in more detail to Chris Mowry and listened as he explained how his company’s research on the history of the nuclear enterprise in the US had revealed that 30% of the material and labor cost of the existing units came from the supplied components while 70% was related to the site construction effort. He described how the preponderance of site work had influenced the cost uncertainty that has helped to discourage new nuclear plant construction for so many years.

He told that his customers have repeatedly told him that they need predictability in both cost and schedule. We also talked a bit about ways to overcome the first of a kind challenge; no matter what product a manufacturer builds, the first one will be an expensive learning experience that will cost more than all subsequent units. That is an area where the Generation mPower Alliance is still talking about the
need for a public-private partnership, perhaps with the first unit being constructed on a national laboratory site or other government installation to supply local loads. Such a development will help the government agency achieve its emission targets while obtaining cost-effective, reliable electricity.

My impression is that Generation mPower has taken a significant step forward in what is certain to be a lengthy journey. In this case, I strongly believe that there are several large pots of gold distributed along the road. It is also a road that may not actually have a destination. Unlike going to the moon, supplying reliable, emission free power is a continuing need that offers steady work for generations to come.

There is one more thing worth mentioning about the event. As a father of two adult daughters who are both well-educated professionals, I could not help but notice the make up of the seven politicians and executives. Those discussions with my girls over the years have reinforced the diversity training that I received as a Naval Officer; visual impressions do matter more than some of us ever thought. However, I enjoyed chatting with Mary Pat Salomone, B&W’s Chief Operating Officer after the event. Mary Pat assured me that the team is significantly more diverse than that photo made it seem. My conversation with Pinar Akgun Gursoy from Bechtel reinforced Mary Pat’s assertion.

Bechtel is one of the largest privately held corporations in America with 49,000 employees around the world and 2009 revenues of more than $30 billion. It is a world class engineering, procurement and construction contractor that has either built or participated in significant renovations at 64 of the 105 nuclear plants in the US.

B&W has been building power plants and plant components for more than 140 years. It has been involved in the nuclear plant construction business in the US for more than 50 years, including significant participation in building small, modular nuclear power plants designed to propel ships and submarines for the US Navy. B&W employs 13,000 people directly and another 10,000 in joint ventures with other companies.

Disclosure: I have a small portion of my personal portfolio invested in McDermott International (MDR). Stockholders of record as of July 9, 2010 (I qualify) will be distributed one share of B&W for every two shares of MDR held as B&W is spun out into a separate company. I have also entered a buy order for a few more shares in the new company, which is currently trading in a “when issued” status.