For the Rest of Us

Please be patient with me on this post – it might take a while before I clearly demonstrate why it belongs on Atomic Insights. First I want to share a couple of entertaining, but informative videos that you’ll probably never see in the commercial media.

This is another version of the same song, performed with a band in front of an audience in a theater.

The star of those videos is David Ippolito, who is known as That Guitar Man from Central Park. I first heard about him and his minstrel-like song writing skills while listening to Adam Curry’s Daily Source Code, which can legitimately stake a claim as being the first podcast. I started listening to that show and to other podcasts in early 2005.

Podcasts might have actually saved my life – it was so much easier to stay alert during my long commute from Annapolis to Washington, DC while listening to intelligent conversation and independently produced music than while listening to ad interrupted, inane talk or “top 40” radio that is produced by conglomerates like Clear Channel.

Curry’s show demonstrated how someone with broadcasting experience as a creative DJ who had run afoul of corporate control could declare his independence and keep on doing the DJ work he loved to do. Curry spoke frequently of his desire to share the sound track of his life without being “encouraged” to follow a homogenizing playlist. As some of you know, I joined the podcasting movement in March of 2006 and have produced more than 180 episodes of The Atomic Show since that time.

For me, podcasting and blogging have never about finding a way to monetize the effort and quit my day job. They have been my way to find and share knowledge with people who might share some of my passion. When your favorite topic is nuclear energy, it is a real challenge to find a local group of people – even if you live and work in a big metropolitan area – who are willing to listen and exchange ideas without their eyes glazing over.

END_OF_DOCUMENT_TOKEN_TO_BE_REPLACED

For the past few months, I have been rereading Ayn Rand’s Atlas Shrugged. Though the book was first published more than 50 years ago, it is remarkably prescient about some of the risks that society can face when too many people forget how to produce items of real value and quality.

It is a book that has been often misrepresented and misunderstood to be a full blown defense of greed, but the people who talk about it in that way have either overlooked or forgotten Rand’s detailed characterizations of sinister, establishment figures from industry, media, arts, and institutional science. They remember that Wesley Mooch was a government dispenser of goodies, but they forget that he was a well-connected business lobbyist before moving into government service.

My current effort with Atlas has been a slow read, especially compared to the first time I read it in college. Perhaps it is slow because I have a lot more things intruding on my time than I did then. I used to be able to devour a thick book in a matter of a week or so; I never have been much for watching television. Alternatively, it might be slow because I have lived a lot in the thirty years or so since the first read.

When I was in college, I breezed through some of the passages without giving them much thought. Since that time, I have met hundreds to thousands of fine people who would qualify for Rand’s praise as producers, but I have also had the disadvantage of having met and worked around some of the moochers. Some of the latter do everything in their power to accumulate wealth but most have no idea how to make or do anything of value. They accumulate money (which is different from true wealth, by the way) by manipulating numbers or markets or by effectively selling useless objects.

One of the underlying stories in Atlas Shrugged is the story of a search for a man who invented a magical motor that could run off of a force roughly equivalent to Tesla’s dark energy. Rand was no scientist or engineer. In addition, Atlas Shrugged was first published in 1957 – the same year that the Shippingport nuclear power station became the United States’s first commercial nuclear power plant. 1957 was only two years after the USS Nautilus first started demonstrating the almost magical qualities of a motor powered using uranium.

END_OF_DOCUMENT_TOKEN_TO_BE_REPLACED 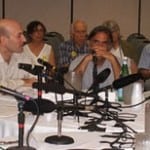 Circumstances sometimes create some rather strange alliances. This week, despite being a proud liberal who proudly supports public education, comes from a family of union school teachers, appreciates the value of being covered by a single payer medical plan and voted for President Obama, I find myself cheering for a group of representatives who are […]

It is easy to find recent news stories describing the effects of high energy prices on the world’s economy. A more challenging task is finding articles or analysis describing effective alternatives to watching increasing quantities of money flow from energy consumers and to energy suppliers. A large portion of this torrent of cash is flowing […]

It made my day to watch the lowly Florida Marlins beat the 26 time “World Champion” New York Yankees. I nearly wept when the mighty Notre Dame football team kicked a last second field goal to squeak out a victory over Navy for the 39th time in a row. I cheered madly when the American […]

Imagine how different the world political stage would be if oil was just another commodity instead of being seen as THE vital ingredient in the world’s economy. Whole power structures and economic arrangements would shift dramatically. No longer would we be treated to the spectacle of democratically elected leaders groveling to despots that just happen […]

As I continue to read as much as I can stomach about Israel’s current struggle for its very survival, I have developed strong desire to shout on the streets. My message to Sharon and all the other leaders in the world is that we do not need oil. That fact should make the equation far […]

Yucca Mountain is a desolate place that resembles a set from “Lost in Space.” Pictures show that there is nothing green there as far as the camera lens can see. It is 50-60 miles from the nearest human settlement. The volcanic tuff that forms the mountain is extremely stable and dry. In the opinion of […]

Most high school projects are dim memories, but I will never forget an assignment given by Mrs. Page, my Semantics teacher. She required us to watch television at least two hours per day for a week, paying close attention to the commercials. We then had to write a paper about the ways that the advertisers […]

Wouldn’t it be great if we could find and energy source that was actually better than oil? It would be incredibly terrific if that new energy source was so abundant that we could not even begin to calculate how long it would last. Perhaps if we were able to do that, we could figure out […]

I want to tell you about a development project in Argentina that has received little attention in the nuclear industry press. Its existence demonstrates the continuing international interest in nuclear technology, even at a time when many industry observers declared that the atomic age had come and gone. CAREM ( http://www.invap.net/nuclear/carem/carem_index-e.html) is classified as a […]

I recently had the pleasure of spending two fun filled days in Washington meeting and socializing with a group of people that goes by the rather ’90’s appellation of NA-YGN. They are young, proud, professional, “alive and kicking.” NA-YGN (North American Young Generation in Nuclear – www.na-ygn.org) is a group of dedicated professionals under the […]