The Nuclear Construction Summit, organized by Nuclear Energy Insider and eyeforenergy.com, is being held at the Dupont Hotel on Dupont Circle in Washington, DC. It is a compact venue; the organizers initially expected that this first annual conference would attract about 80-100 people, but the full registered attendance is about 159 plus another 25 for the speakers and press. The conference organizers have done a good job in accommodating the increase and in keeping the event running on schedule, but it is definitely a well attended event without any extra seats or space in the speaking hall.

I have captured the audio from some very interesting talks provided by a consultant from France who shared some of their experience, from an analyst from the Energy Information Agency, from a long time US nuclear industry consultant who share many excellent lessons available to be learned from the first nuclear age (I phrased that carefully, neither he nor I believe that all of the lessons have actually been learned and adopted yet) and from the regional administrator who is responsible for the NRC’s construction inspection program. Unfortunately, other commitments prevented me from attending the afternoon sessions.

I did get a preview of one afternoon talk, however. I noticed an attendee named Dale Lloyd with Southern Company on his name tag. I asked him how the planning is progressing for Vogtle units 3 and 4. He told me that he was scheduled to speak about that during the afternoon session, (his talk was titled Vogtle 3 & 4 – Current Status and an Owner’s Perspective of a New Build Project in Progress) but that it was going very well. I asked if any bulldozers were moving yet, since they had received a Limited Work Authorization from the NRC. He smiled and told me “yes, it is a real construction site”. I asked how many people were on site, his answer was about 400-450 people. 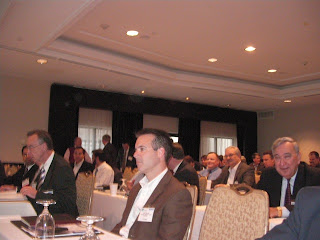 There is no safety grade concrete being poured, but otherwise there is a lot of site preparation and other construction going on to enable a timely completion of the plant once that starts. Based on all of the information provided during that interchange and other comments during the morning session, it appears likely that Vogtle unit 3 will be operational on the grid sometime in late 2016 or early 2017, with unit 4 about 6 months to a year behind that.

So the next time that someone tells you that there are no new nuclear plants under construction in the US, you can smile smugly and walk away – or do like I do and argue the point with data and perhaps even a photo or two.

Shaw Group, which has a 20% ownership stake in Westinghouse Electric Company LLC, has announced a new plant that will build reactor components to be shipped via barge to new construction sites. The plant, destined for Lake Charles, Louisiana, will be a joint venture between Shaw and Westinghouse with about $210 million in assistance spread…

Jack Gamble posted this video on his Nuclear Fissionary blog on January 19, 2011. At the risk of stealing some of his traffic, I just had to share it with you. Please pass it around!

The Center for Media and Democracy – PRwatch.org has a well-researched piece about the nuclear industry’s public relations actions partially aimed at overturning the outright ban on new nuclear power plants in Wisconsin. It warms my heart to realize that there are some serious efforts underway to engage the public in a discussion about the…

I have spent the past couple of hours reading the first hundred pages of Thomas Friedman’s influential new book titled “Hot, Flat and Crowded”. It is thought provoking and worth reading if you want to understand some of the discussions and actions that may result in the next few months. People in positions to make…

According to a 29 Novement 2005 article published on the online.ie web site, Irish Minister for the Environment Dick Roche, Fine Gael spokesman Fergus O’Dowd and Green Party spokesman Ciaran Cuffe have expressed their concern about the UK’s recent statements that they are considering an energy policy that might include new nuclear plants. Specific concerns…

My years as an operating engineer has turned me into a contrarian and a pessimist who is constantly looking for signs of trouble, especially as others get excited and focused on temporary good news. My years as a critical consumer of commercially sponsored media has also made wary of sales pitches disguised as news stories….