There have been many analytical reports issued in the 8 days since ExxonMobil announced that it was purchasing XTO Energy, one of the largest independent natural gas producers in the United States, for a total of approximately $41 billion. ($31 billion in ExxonMobil stock plus assumption of $10 billion in XTO debt.)

Some analysts have cheered the announcement as a validation of the new paradigm that US domestic natural gas is an abundant fuel that should be more widely used to propel vehicles and generate electricity while producing a somewhat lower quantity of polluting emissions than burning coal, diesel fuel or gasoline. Here is a quote from a Washington Post article titled Exxon Mobil to buy natural gas specialist

Analysts called the acquisition a bet on future demand for natural gas as the nation looks for energy sources with lower greenhouse-gas emission levels than coal and oil. It also reflects growing confidence among utilities and industry that recent advances in exploiting natural gas from widespread deposits of shale rock have unlocked vast supplies of gas for wider use at reasonable prices.

Others have questioned the timing of the deal, indicating that they think it is not smart to be paying a 25% premium over the market price for a gas producer at a time when natural gas prices are lower than they have been in recent history and storage volumes look high enough to keep them low for the foreseeable future. Here are some samples of those kind of comments from a Wall Street Journal blog entry titled

Collins Stewart: “Given the size of the XTO acquisition, the relative weakness in the North American natural gas market, and the fact that it appears XOM is paying a more generous price for XTO’s resources than the value of its own underlying resource base, we expect [Exxon Mobil] to underperform the other integrated oils.”

Goldman Sachs: “The question investors will ask is whether an acquisition of a large-cap E&P is consistent with its returns focus. In our view, Exxon will need to demonstrate that it can develop XTO’s resources at an even lower all-in cost than XTO or other E&Ps; we would be surprised if Exxon management were basing the acquisition on materially higher US natural gas prices.”

I think those analysts are wrong. ExxonMobil has a history of being able to buy low and sell high. Its internal analysts have a deep understanding of the cyclical nature of the fuels market and access to some of the world’s most experienced explorers and extractors of fossil fuels. The last time the company decided to make a major purchase – when it decided to purchase Mobil for $82 billion in December 1998 – the fuels market was also at a relatively low point. 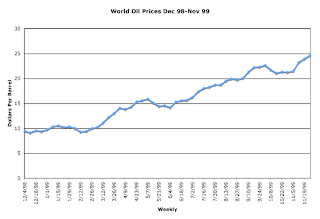 When they announced the deal, Exxon and Mobil insisted it was necessary to help them find greater efficiencies amid low crude oil prices last year. Low oil prices put the squeeze on a company’s margins in its “upstream” activities, or their exploration and production operations.

Prices in the fuel market continued to “improve” for several years after the merger with Mobil closed and Exxon increased its net income per share by a factor of 7.5 between 1998 and 2008. That is a pretty respectable performance for a company that was already one of the world’s largest companies in one of the world’s most established industries. XOM also increased its net cash position by a factor of 4, increased the value of its common stock held in treasury from less than $20 billion (2001) to nearly $150 billion (2008) and paid some amazingly generous bonuses. One thing it did not manage to do with that purchase, however, was to increase its daily production of its primary product – barrels of oil equivalent. During the period from 1998-2008, that measure of the company’s production actually fell by about 10%. (The incredible financial success on a lower production base means that the company’s customers were providing a heck of a lot more revenue for every unit that the company produced.)

It is certainly possible to assume that Exxon’s purchase of Mobil was a well timed, lucky bet. My analysis tells me that betting against Exxon’s choice would be like betting against the house on a blackjack table. In fact, I have just placed an order for some ExxonMobil shares.

This does not qualify as a smoking gun because it does not include a specific anti-nuclear comment from someone who has a visible connection to finding, extracting, transporting, trading or marketing coal, oil or natural gas. However, a recent article in the Wall Street Journal titled No Uptick Seen for Natural Gas Prices, ENI Says…

Using words that could almost have been taken from President Eisenhower’s 1953 Atoms for Peace speech, President Bush recently elaborated on his recent State of the Union comment about investing in energy solutions – including “clean, safe nuclear energy”. The full text of his 18 February 2006 radio address is posted on the White House…

Some of you who listen to The Atomic Show might remember episode #132 titled The Atomic Show #132 – Ray Squirrel Interviews (Atomic) Rod Adams. That show was a lengthy interview conducted via Skype during which a journalist asked me a whole bunch of questions. A few of you know that the interview was conducted…

UP 5647 east.Uploaded by BNSFrailfan. – Discover new destinations and travel videos. This might get a little boring. Think about how the people who live next to the tracks feel as they see fuel trains like this pass by with depressing regularity. There are 127 cars full of coal, each carrying approximately 100 tons of…

I have done some reformatting of the graph of non combustion energy sources in the US during the period of 1949-2006. Following the suggestion of Kirk Sorensen, I put wind, solarPV and geothermal on the bottom of the chart in an attempt to better illustrate their growth. Feedback is welcome. Source of the data is…

Ronald Cooke, author of Oil, Jihad and Destiny has published an article on Energy Pulse titled The 2006 Economic Forecast: Oil Remains a Wildcard that should be required reading for government policy making officials. If you are involved in any government economics policy or if you are a strategic planner for a business, or if…