Corrected with New Headline (Updated information and graphics on Sunday, March 13, 2011 at 0440 EDT)

I am going to leave my original text below, so it does not look like I am using updated information to avoid responsibility. During a day of confusion, there were conflicting reports about the source of an explosion and cloud of white smoke at Daiichi Unit 1. I theorized that the explosion happened in the turbine building and came about as a result of earthquake induced leaks in the hydrogen cooling system that I suspect is used for the electrical generator. 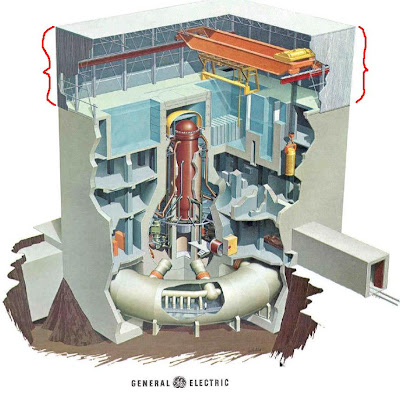 As time progressed and the fog of coverage lifted, it became more clear that the building that was damaged was, indeed the reactor building and that the specific section of the building damaged was the secondary containment steel framed structure. The type of construction in that section is sheet metal attached to steel frame, those sheets can be blown off by a very small pressure differential between the inside and outside.

Here is a link to a New York Times photo that helps to illustrate the current state of the area identified by the red brackets in the included graphic. http://www.nytimes.com/imagepages/2011/03/13/world/13nuclear2.html You can find a detailed explanation of the damage to Daiichi Unit 1 at Events at the Fukushima Daiichi Nuclear Power Plant in Japan

Bottom line – my guess was wrong, but the important part of the containment remains intact and continues to protect the public from any negative health effects as a result of any core damage that is occurring due to a lack of circulating cooling water.

I initially posted the following as an update to the post titled Nuclear plant issues in Japan are the least of their worries but have now decided to post this as an independent observation and expand a little bit on it. Here is what I posted at 11:20 am EST on March 12, 2011.

In the Gannon Station case, the hydrogen for the explosion came from the cooling system for the very large electrical generator. Maintenance workers apparently did not ensure that the system was properly purged before opening it for maintenance.

My guess is that a similar generator cooling system was in use at Fukushima Daiichi. Considering the devastation that has occurred as a result of the earthquake and the tsunami, it would not be terribly surprising if the electrical generator cooling system developed some hydrogen leaks. From what I have read about the actions taken to cool down the nuclear fuel inside the reactor, which is inside a robust containment building, not a steel frame building, I am guessing that the explosion had nothing to do with the heat source that normally supplies the the steam to turn the turbines that turn that electrical generator.

I am quite willing to eat crow if it turns out I am wrong.

When the video moves to a closeup, however, there is the potential for confusion because the reactor building to the far right is cut out of the picture leaving one to believe that the explosion might have occurred in the third of three visible reactor buildings.

Update: It looks like I might have been guessing wrong. About thirty seconds after I posted this blog, a friend passed a link to a photo clearly showing that the top of the reactor building had been damaged and exposed a steel frame.

The reports still indicate that the actual containment and reactor vessel are not damaged; the area at the top this kind of BWR is not part of the containment structure.

Anyone know a restaurant that serves edible crow? End Update.