It is well known that almost any new nuclear power plant project in the United States will attract organized opposition. Opponents will use a litany of familiar arguments and a variety of known techniques to slow or stop the project.

It is also well known that continued operation of existing plants can attract opponents who work as hard as they can to shut the plant down. These battles normally occur near some large decision point, like the approaching expiration of the initial operating license or the need to invest a significant amount of money into a needed repair, like replacing steam generators. They can also develop when there are changes in rules like the current trend towards applying restrictions on once through cooling water use to plants that that have been operating for several decades without cooling towers.

However, even rather simple and logical decisions like investing a bit to enable more power output from existing facilities can attract intervention and opposition. These situations can expose interesting agendas and confusion about what it really means to have adequate electricity supplies.

On Friday, a coalition of Wisconsin Citizens’ Utility Board and Clean Wisconsin supplied a filing to the NRC registering their opposition to a proposed uprate at the two unit Point Beach nuclear plant. The company that owns the facility, NextEra Energy Resources, Inc., has proposed some plant modifications and improvements that would increase the total generating capacity by 17%.

According to an article on Milwaukee Wisconsin Journal Sentinel online titled Groups question need for nuclear plant power boost , the upgrade is unnecessary because the state’s electricity consumption is no longer increasing as rapidly as it was when the project was first proposed; the recession has slowed the rate of increase from a previous 2% per year to something closer to 1%. There is also some discussion about the relationship of the upgrade with other needs for transmission capacity and some discussion about the fact that there have already been some proposals to idle existing power generation facilities. 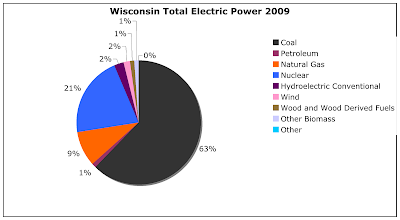 Here is a chart that shows the 2009 shares of the Wisconsin electricity market. According to this pie chart, which was created from data supplied by the Energy Information Agency for 2009, coal combustion supplies 63% of the power that is generated inside the state, while nuclear energy is just a bit over 21% of the power. Wisconsin might have plenty of capacity for generating electricity, but more than 70% of the kilowatt hours produced require burning something and disposing of the combustion wastes into the air and water.

Here is the mission statement from Clean Wisconsin, one of the groups that filed its opposition to the plan to increase the energy supplied by Point Beach.

Clean Wisconsin’s Mission
We join together to protect, improve, and sustain Wisconsin’s clean water and air. We accomplish this through:

It would seem that increasing the portion of the power that is generated from emission-free, already existing nuclear plants would be something that organizations devoted to clean air and water would naturally support. According to a reasonable interpretation of Clean Wisconsin’s mission statement, they would appear to be a natural supporter of a nuclear plant capacity increase. For some reason, Clean Wisconsin is apparently convinced that it is better to burn more coal or gas than to fission a little bit more uranium.

Clean Wisconsin’s partner in the filing, the Wisconsin Citizens’ Utility Board, is not any more logical as an opponent for a nuclear plant capacity uprate that will install new equipment and most likely improve the plant’s long term reliability. That group tells people that its mission is to fight for reliable and affordable electricity; Point Beach is one of the most reliable and affordable power suppliers in Wisconsin. Though any issues at the plant make the news, and people get told whenever the plant is not available, Point Beach has achieved average capacity factors greater than 85% for the past half dozen or more years. Any money that NextEra spends in trying to overcome the opposition to the uprate will not be spent trying to improve reliability or affordability.

Nuclear fission advocates obviously have a lot of work to do.

It has been a week where blogging had to fall off the priority list of things to do. However, I did want to follow up on the “Costs of Conservative Action” post from 18 October 2005 to report that Palo Verde did, indeed get back up to full power by the end of the day…

Yesterday the Senate Energy and Natural Resources committee held a hearing on the potential for small, modular nuclear power plants that I really wanted to attend, but could not due to schedule conflicts. A loyal reader, however, sent me a link to a video summary of the hearing produced by Dan Goldstein and Tyler Suiter…

The Hyperion Power Module continues to generate discussion. Many blog posts on the topic are mere repetitions of the same stories, right down to the misquotes about cost per unit energy. There is a good article posted on Physicsworld.com with answers to some of the questions that people have asked about the HPM. I highly…

Yesterday, the Vermont Legislature warmly received a non-nuclear energy salesperson and allowed her to continue her traditional tactic of emotionally telling negative stories about the competition. I know, that is a purposely provocative way to describe the event, but that is certainly one way of looking at a situation where wind and solar entrepreneurs named…

I have not yet had a chance to view this, but the material in this video was partially prepared by my friend, Kirk Sorensen, so I know it is good. Hope you enjoy:

The continuing saga of the USEC project to build a new enrichment facility at the Piketon, Ohio facility using a recently developed and tested technology called the American Centrifuge is getting more intriguing each day. On July 28, 2009, publications specializing in stock market reporting contained blurbs explaining the activity in USEC stock on July…