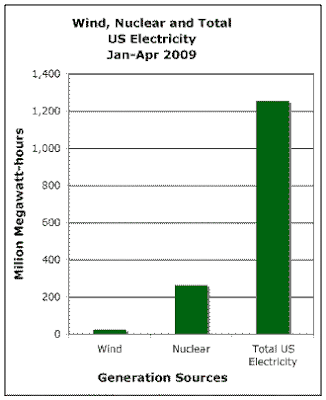 Every month, the US Energy Information Administration issues a report called Electric Power Monthly that provides a snapshot of statistics on the production of electricity in the United States. It usually takes several months to process the data provided by utilities and merchant power generators, so there is a three month gap between the report and the data on which it is based. The July 2009 report is therefore reporting on data through April 2009.

There have been a few breathless summary reports by renewable energy fans of the numbers in the July reports.

On July 20, 2009 BusinessGreen.com, for example, published an article under the headline of Coal on the slide as renewables top 11 per cent of US power mix that was unquestioningly picked up and quoted in a news roundup article at ClimateProgress.org under the headline of Energy and Global Warming News for July 20th, 2009: Renewables surge to 11% of US power mix, as coal drops to 46%; Fish “shrinking due to global warming”.

Here are the key quotes from the BusinessGreen.com article:

As a raft of states pass new legislation demanding increased renewables capacity, new figures confirm green power now accounts for over a tenth of US energy.

The renewable energy revolution under way in the US appears to be gathering pace according to new figures from the Energy Information Administration suggesting that zero carbon energy sources are successfully replacing fossil fuel-based forms of energy production.

According to the Administration’s July Electric Power Monthly report, green energy generation accounted for 11.1 per cent of total electricity production in the country between April 2008 and 2009.

The lede for the ClimateProgress.org article was even more excited:

So far, my call is right on track: “I predict U.S. carbon dioxide emissions peaked in 2007!”

Aside: neither the news roundup or the linked article display a by-line, but normally the first person possessive at Climate Progress refers to the editor, Joe Romm, and not one of the listed contributors or writers. End Aside

In fact, Ken Bossong of the SUN DAY Campaign notes that in April, wind, solar, hydro, biomass and other clean energy sources that never run out hit 13% of total electrical ouput.

The renewable energy revolution under way in the US appears to be gathering pace according to new figures from the Energy Information Administration suggesting that zero carbon energy sources are successfully replacing fossil fuel-based forms of energy production.

According to the Administration’s July Electric Power Monthly report, green energy generation accounted for 11.1 per cent of total electricity production in the country between April 2008 and 2009.

Sorry for the raft of links and potentially confusing quotes; now I will return to my headline point, which is that these articles are doing what my statistics teacher taught me to assiduously avoid. They are using numbers to lie to their audience.

It is easy to lie with statistics if your audience is not aggressive about questioning the entering assumptions and the resulting math. Here is the actual figure and summary paragraph from the July 2009 Electric Power Monthy: 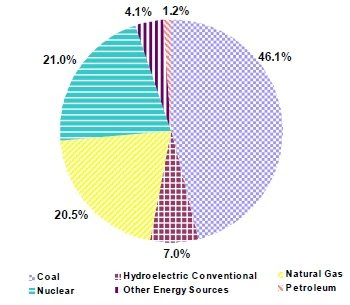 It is important to understand how the Energy Information Agency groups data and classifies energy sources. You can find these footnotes on the Energy Information Agency Table 1.1 Net Generation by Energy Source: Total (All Sectors) which has columns labeled Coal, Petroleum Liquids, Petroleum Coke, Natural Gas, Other Gases, Nuclear, Hydroelectric Conventional, Other Renewables, Hydroelectric Pumped Storage, Other.

The term “other renewables” includes the following energy sources:

While the term “other” miscellaneous energy sources leads to the following footnote:

Labeling electricity from what the Energy Information Agency classifies as other renewables and other miscellaneous energy sources as “green energy generation” is deceptive at best. Somehow black liquor, municipal solid waste, sludge waste, batteries, chemicals, pitch, sulfur, and tire-derived fuels just do not sound “green” to me. I would also not like to think of them as “other clean energy sources that never run out”. Unfortunately, they may never run out, but they are certainly not clean.

People with questioning attitudes should consider the context when reading glowing reports about how rapidly the power generation landscape is changing, especially if the reports are based on statistics from spring or fall electric power generation. Traditionally, electric utilities will perform scheduled maintenance on their large coal and nuclear power plants during spring or fall when seasonal demand is low. Conventional hydroelectric power production also runs a bit higher than average in the spring due to melting snow packs in mountain regions.

Of course, he has the right to make any statement he wants, but it can be useful to look at the raw numbers. Even though wind grew at a 35% rate for the first four months of the year when comparing 2008 to 2009, the difference in output between the two years was just 6128 thousand megawatt-hours. The “essentially stagnant” nuclear power plant output increased by 5840 thousand megawatt-hours. In other words, “essentially stagnant” nuclear power plant output increased by more than 95% of what Ken Bossong called a “dramatic” increase in wind generated electricity.

I wonder what motivated Ken to say the following – as quoted from SUN DAY Analysis: Renewable Electrical Generation Sources Soar.

“Apologists for the nuclear and fossil fuel industries persist in trying to mislead the public by repeatedly spreading the myth that renewables account for only a tiny fraction of U.S. electricity production,” according to Ken Bossong, Executive Director of the SUN DAY Campaign. “However, the hard numbers document the continuing dramatic growth in renewable energy’s already-significant contribution to the nation’s electricity supply — a contribution that will eventually leave coal and nuclear behind in the dust.”

When you see words like that, please take the time to consider the source and to do a little of your own thinking, reading and number crunching. You just might learn something that people like Ken Bossong and Joe Romm would prefer to keep obscured by surprising energy source groupings and carefully manipulated statistical summaries.