I am still fascinated by the way that the World Wide Web opens up an entirely new way to understand the way the world works and thinks. Of course, my own view is limited by time and by the fact that I only speak English, but it is amazing that I can be rapidly made aware – through the use of scheduled searches by Google Alerts – of a discussion about new nuclear power plants published earlier today in a newspaper on the other side of the world.

Here is a link to an article from Malaysia titled Crosstalk: Is Nuclear the Answer? Quite honestly, I had only a fuzzy understanding of the exact location of Malaysia, but my initial memory was that it is a mostly island nation in the South Pacific. 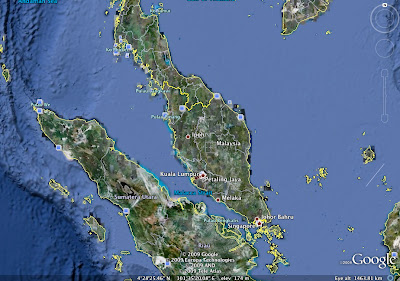 With the tools at my fingertips, I felt the need for a bit of exploration. Granted – a writer in the 20th century could do some of what I just completed by spinning a globe and pulling a book off of a shelf, but he or she would not have been able to provide the impression of actually flying to the desired location and then zooming down for a look. That 19th or even 20th century writer would not have been able to instantly figure out that the current population of Malaysia was 25,715,819 (estimate for July 2009) or that the stimulus for the nuclear discussion in Malaysia is the growing realization that the country’s natural gas reserves are dwindling and coal imports are rising.

So now I know a bit more about a strategically important peninsular nation that borders on one of the world’s most important and frequently traveled straits. (I would have known more if I had spent much of my Navy time in the Pacific, but my only tour off of the East Coast of the US was a 20 month stint in Monterrey at the Postgraduate School.) I found out that Malaysia will be getting some assistance in their nuclear feasibility study from South Korea, a country with similar characteristics that has developed a world class domestic nuclear capability.

I also recognize that the discussion about nuclear energy development in that country is being led by at people who have a real understanding of the technology based on three decades of operating a research reactor and even longer experience in developing a large power grid while the opposition stubbornly clings to some rather tired and dated arguments. Go now and read the debate and see if you do not agree.