Editor’s note. This post has a deep background story. The author, Mike Derivan, was the shift supervisor at the Davis Besse Nuclear Power Plant (DBNPP) on September 24, 1977 when it experienced an event that started out almost exactly like the event at Three Mile Island on March 28, 1979.

The event began with a loss of feed water to the steam generator. The rapid halt of heat removal resulted in a primary loop temperature increase, primary coolant expansion and primary system pressure exceeding the set point for a pilot operated relieve valve in the steam space of the pressurizer. As at TMI, that relief valve stayed open after system pressure was lowered, resulting in a continuing loss of coolant. For the first twenty minutes, the plant and operator response at Davis Besse were virtually identical to those at TMI.

After that initial similarity, Derivan had an ah-ha moment and took actions that made the event at Davis Besse turn into an historical footnote instead of a multi-billion dollar accident.

When Three Mile Island happened and details of the event emerged from the fog of initial coverage, Mike was more personally struck than almost anyone else. He has spent a good deal of time during the past 35 years trying to answer questions about the event, some that nagged and others that burned more intensely.

In order to more fully understand the below narrative, please review Derivan’s presentation describing the events at Davis Besse, complete with annotated system drawings to show how the event progressed.

Warning – this story is a little longer and more technical than most of the posts on Atomic Insights. It is intended to be a significant contribution to historical understanding of an important event from a man with a unique perspective on that event. If you are intensely curious about nuclear energy and its history, this story is worth the effort it requires. Mike Derivan (mjd) will participate in the discussion, so please ask for clarification if you still have questions after you have read the story and the background material.

The rest of this post is his story and his analysis, told in his own words.

My first real introduction to the Three Mile Island (TMI) accident happened on Saturday March 31, 1979. At Davis Besse Nuclear Power Plant (DBNPP) in Ohio we heard something serious had happened as early as the day of the event, March 28, and interest was high as it was a sister plant.

Actual details were sketchy for the next couple of days, and mainly by watching the nightly TV news it became clear to me that something serious was going on. It was clear from watching the TV news reports that conflicting information was being reported. Some reports indicated there had been radiation releases and also reports by the utility, Metropolitan Edison the owner of TMI, of no radiation releases.

I even remember hearing the words “core damage” first mentioned. It was that Saturday on a TV news report I saw the first explanation using pictures of the system to the suspected sequence of events and it became clear to me the Pilot Operated Relief Valve (PORV) had stuck open.

My reaction was gut-wrenching and I was also in disbelief that TMI did not know what had happened at Davis Besse. That evening I watched the Walter Cronkite news report.

That report is discussed on this excerpt from Democracy Now on the occasion of the 30th anniversary of the event.

I sat there with total disbelief as he discussed potential core meltdown. Disbelief because if you were a trained Operator in those days it was pretty much embedded in your head that a core meltdown was not even possible; and here that possibility was staring me right in the face.

Cronkite’s report was also my first exposure to the infamous hydrogen bubble story. I had had enough Loss of Coolant Accident (LOCA) training to understand that some hydrogen (H2) could be generated during Loss of Coolant Accidents; after all we had Containment Vessel hydrogen concentration monitoring and control systems installed at our plant. But the actual described scenario at TMI seemed incredible, except it had apparently happened.

END_OF_DOCUMENT_TOKEN_TO_BE_REPLACED

There is a good reason why life often imitates art in the form of fictional stories; good creative writing teachers emphasize the importance of research and a firm understanding of reality. Writers are taught — or learn on their own — that people prefer reading stories that are believable. Even fantasy or science fiction follows that general guidance. Authors take the time to provide enough details about the imagined technology and science of the created world so that the actions of the characters make sense within the constraints of the time and place the author has created.

Creative writers, especially those who spin mystery stories, also learn the importance of perspective or “point of view”. The lens of knowledge, experience, and task assignment through which one views any event, series of events, individual technology or even entire industries play a crucial role in the way stories are told or opinions are developed.

Events often look very different depending on who tells the story; that is why investigators need to interview so many different witnesses in order to gain a real understanding of how something happened.

During the nearly 35 years since March 28, 1979, one reason that almost no one has heard of the possibility that a saboteur chose to insert a specific series of faults at a specific time is because the published reports came from groups that were filled with people tasked to investigate an industrial plant death that came from either natural causes or suicide. None of the well known published reports came from a group tasked to consider all possible causes of industrial plant death, including murder.

Any aficionado of crime dramas knows that murderers generally get away with their crime if no one thinks to ask “homicide” to get involved in the investigation. Clues can disappear — or be “disappeared” by the criminal — if the crime scene investigators are not quickly called in.

Mystery story fans also know that there might be a star investigator who is able to piece together a series of random clues to figure out “whodunit”, but that investigator is generally a lot more effective when she has access to a team full of people with wide ranging specialities, including specific technical expertise relevant to the subject crime scene.

END_OF_DOCUMENT_TOKEN_TO_BE_REPLACED

The first installment of this series, titled Sabotage may have started Three Mile Island accident, describes how a number of individually improbable equipment conditions came together at 4:00 am on March 28, 1979, one year — to the minute — after the start of commercial operation at Three Mile Island (TMI) unit 2. It also […] 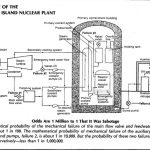 Updated (Sep 10, 2014 at 5:40 am) This post has been revised to improve the explanation of event sequence and resulting plant response. End update. Updated (Jan 21, 2014 at 10:40 pm) The pattern is not completely clear, and there are pieces missing from the puzzle, but I have found enough bits of evidence to […]

Galen Winsor makes a startling statement in the above video; he claims that the Three Mile Island event was no accident. He states that the “GE Three” of Gregory C. Minor, Richard B. Hubbard, and Dale G. Bridenbaugh wrote the script for both The China Syndrome and for Three Mile Island. He also claims that […]