If you Google “toshiba personal reactor” you will find hundreds of recent blog posts. Here is one example from dvorak.org/blog titled Toshiba’s Personal-Sized Nuclear Reactor. I have had several readers send me links asking what I thought about the design and wondering whether or not the system is real. I have taken some time this morning to do a bit of research and wanted to share what I have learned.

First of all – I have no knowledge of whether or not the post that appeared in nextenergynews.com titled Toshiba Builds 100x Smaller Micro Nuclear Reactor came from Toshiba or not. I also do not know if the logo below is really from Toshiba or if it was created to illustrate the blog post. 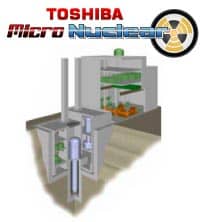 Update as of 2 Jan 2007:
One of the advantages of electronic media is the opportunity to update stories so that new readers who visit get more accurate information if it is available. Since publishing the original text of this story, I have made contact with some good sources within Toshiba to confirm that the original story posted on nextenergynews.com did not originate with them. According to Toshiba, the project that they consider to be a super-small reactor is the 4S (Super-safe small and simple) design. The company initiated the process for preliminary review of that design in 2007 with the US Nuclear Regulatory Commission and believes that the system may be ready for commercialization sometime in the “mid 2010s”.

The company confirmed my guess that the 200 kwe number in the hoax article is based a JAERI concept design for a lunar application. The “news” article from nextenergy news merged two very different projects and used a sketch associated with the 4S and called it a logo for the “new” device. Bottom line – Toshiba is not introducing an apartment sized machine and does not have any plans for a small reactor to be in operation for quite a few years.

One more interesting part of this story is the fact that the International Atomic Energy Agency (IAEA) provides a daily news feed that does an automatic search of various sources. The IAEA has numerous disclaimers on the site to make sure that people know that it is simply pointing to stories and does not endorse their content. That service had picked up the story on their December 24 feed, so when I contacted my sources, they were already working on answers to my questions. Who says nukes do not understand modern technology and the new media?
End of Update. Back to the original article text

What I do know is that the technical description of the plant matches a design called Rapid-L which was initiated by the Japan Atomic Energy Research Institute (JAERI) in 1998 under the Fundamental Nuclear Research Promotion System (FNRPP). The original system research and design was led by Mitsuru Kambe of the Central Research Institute of Electrical Power Industry (CRIEPI). You can find out more by visiting the following links:

If you want to see a pretty illustrative side view of the system, you can find one here – notice that it does not match well with the logo above:

The system has some interesting features that include a passive reactivity control system that helps to mitigate the effects of fuel depletion, allowing a long fuel life. The reactivity control system uses lithium-6 while the reactor fuel material is uranium hydride. The active part of the reactor core is a module called an Integrated Fuel Assembly (IFA) that can be replaced as a unit. The core life seems to be somewhere between 10 and 20 years. The reactor is designed to be installed below grade so that the ground provides the necessary shielding. The container is about 6.5 meters tall and 2 meters in diameter. The complete assembly weighs about 7.5 tons.

The RAPID-L has been designed as the heat source for a thermoelectric power conversion system. This choice removes some of the operator actions that are required with reactors that have heat conversion system steam plants or closed cycle gas turbines, but it comes with a pretty significant efficiency cost.

According to the literature, the RAPID-L reactor generates 5 MW of thermal energy but only 200 kw of electric power. That tracks with my understanding of thermoelectric conversion efficiency – it is generally something less than 5% at the temperature being produced by the RAPID-L with the cool side of the thermoelectric device being atmospheric air.

Most of the reliable links that I have found with information about the RAPID-L indicate that Mitsubishi Research Institute has had some involvement in the project.

I have no idea how or why the information about this system captured so much recent attention in the blogosphere in the past couple of days, but if anyone figures out the mechanism for the buzz I would sure appreciate learning more.

After all, Adams EnginesTM is working hard to participate in the market for small nuclear plants that was described for the “Toshiba” system. We honestly believe that we have found a way to produce plants that will compete with diesel engines and combustion gas turbines in the micro power market, but we have no thought of calling our machines a “battery”. We kind of like the idea of training and employing some skilled operators.