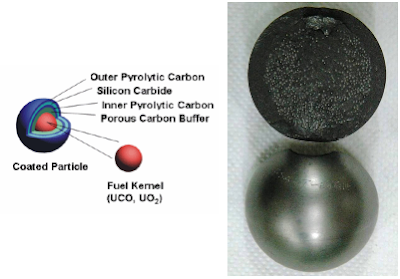 Last year, the PBMR company in South Africa began testing TRISO coated fuel particles containing Uranium Dioxide enriched to 9.6% U-235. These 1 millimeter diameter fuel particles are the fundamental building blocks of the high temperature fuel that the company intends to use in their gas cooled modular reactors. The next higher level of assembly is the fuel pebble, which is a 6 centimeter diameter sphere that contains approximately 14,000 of the TRISO particles.

According to a press release scheduled for release on September 6, 2009 (today) the PBMR company has shipped 14 completed pebbles to Russia for continued testing at the Institute of Nuclear Materials (INM) in Zarechny near Ekaterinburg. Jaco Kriek, the company CEO, is pleased with this incremental step in their development process:

“We are very proud of this achievement, especially since the pebble fuel is at the heart of the PBMR’s safety case. The manufacturing of the fuel spheres is the culmination of many years of intensive development work at PBMR’s Fuel Development Laboratories on the Necsa site at Pelindaba near Tshwane. The irradiation tests are the final step in the development of the fuel for the PBMR demonstration unit and we are keenly anticipating the results.”

The irradiation testing will begin in January 2010 and will take approximately two years to complete.

Aside: Fuel testing is one of the long lead time items in nuclear reactor development. Unlike competitive power sources, nuclear fuel “burns” very slowly, so doing a full test of how the material will behave throughout its life in the plant requires a very patient researcher. In a combustion engine, you can burn through dozens to hundreds of tanks of fuel in the same amount of time. That is a disadvantage for innovation in nuclear energy, but it sure is nice during operation. End Aside

Check back here later for the link to the full press release. It has not yet appeared on the PBMR web site.

Update: (Posted on September 8, 2009 at 0325) The press release announcing the shipment of pebbles for testing is still not on the PBMR site, but there are other news reports that mention it – PBMR sends enriched pebble fuel for testing in Russia from Creamer’s Engineering News and South African enriched pebble bed reactor fuel heads for Russia from Power Engineering Magazine.

Amory Lovins appeared on the Charlie Rose show on November 28, 2006. Through the magic of Google Video, you can see the interview at Charlie Rose – Amory Lovins / Ian Schrager. At the beginning of the interview, Charlie began talking about how Amory had attended Oxford. I was impressed by the honest of Amory’s…

Ever since the first oil price shocks of the 1970s, it has been fashionable for some energy market observers to sagely recommend conservation and energy efficiency as the cheapest, quickest form of new energy supply. Amory Lovins famously gave this response to energy challenges the name “negawatts”. Conservation and efficiency are attractive notions – people…

I knew it was going to be an interesting night, worth stretching my already long day to the point where I did not even leave DC until after my normal bedtime. The event was nearly custom designed to provide excitement, at least for a pro-fission geek like me. The headline acts at last night’s Energy…

Right after my last post, I realized that the magic of YouTube was showing me that there was already a rebuttal posted to “Stop the nuclear bailout”. Elizabeth King, a well spoken young woman from the NEI, shares her thoughts in a short, well written video titled For What It’s Worth – A Rebuttal. Way…

Normally, I am reluctant to simply reproduce a press release, but I figured you might be interested in this one. From the Nuclear Energy Institute: As Texas copes with rolling electricity blackouts and its coldest temperatures in decades, you should be aware that the state’s four nuclear power plants – which have a combined electric…

My Google Alert on new nuclear power plants pointed me to a very useful article by Jack Spencer titled What Finland Can Teach US About Power. It is worth a close read. Unfortunately, I have run out of time this morning – instead of blogging I spent the time processing another episode of The Atomic…