The Union of Concerned Scientists (UCS) has recently published a report titled Unlearned Lessons from Year-plus Reactor Outages that makes some rather absurd claims. The most glaringly wrong comment from the web site that has been set up to market the report is the following:

This event—an outage at a nuclear power plant that lasts more than a year—has happened 51 times at 41 different reactors around the United States and shows no signs of stopping.

Any reasonably competent scientist or statistician would immediately look at a statement like that and demand to see the data so that the trend can be plotted to see if there really are “no signs of stopping.” Fortunately, the UCS is honest enough to provide us with the dates of the outages that are being discussed. Here is what those dates (I chose to plot the dates when the reactors were restored to service) look like on a graph. (Each green dot represents the number of long term shutdowns in a given year. The first dot is 1970, the last is 2005. My Excel graph control skills let me down – I could not convince the program to label the x-axis the way I wanted it to.) 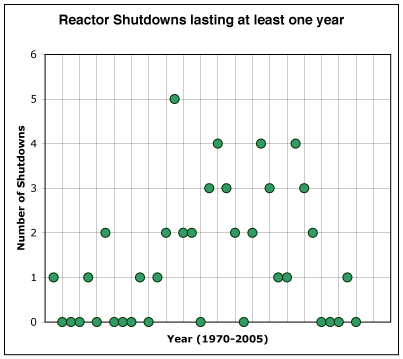 If you can see from this data how one can say that there is no sign of stopping or improvement, please let me know how to do the best fit line. What the graph tells me is that in the past five years, long enough for someone to finish an engineering bachelor’s degree in a good school, there has been just one long term shutdown.

There is a good discussion about the report and the NY Times coverage of it on The Energy Blog at Nuclear Saftey Issues. (I really can spell – or at least operate a spell checker, but if you want to find something on the web, you had better spell it the same way as the author did.)

Jill Buck is the founder and Executive Director of the Go Green Initiative. According to the organization’s About Us page, this is what her organization believes: People care about protecting children’s health and safety through environmental stewardship. People will do the right thing when given trustworthy information, expert training and simple tools. People appreciate a…

I confess – I like atomic fission power. It is far superior to the competition, so much so that they gang up on it to try to give it a bad reputation. Part of fission’s PR problem is analogous to the way that sports fans and commentators treat people like Alex Rodriguez, Tiger Woods, Barry…

A recent acquaintance provided me with a link to a tool he has created for US citizens to provide feedback to their representatives about the American Energy Act (HR 2828). Please try out the tool and let me know what you think. The tool includes a link to the Thomas.gov site where the draft legislation…

A couple of days ago, I posted some musings about the amount of uranium available on the earth. One of the Atomic Insights blog readers responded with a link to an interesting paper titled “How much Uranium is in the Earth? Predictions for geo-neutrinos at KamLAND”. Okay, I will admit that the paper is a…

I am appalled that it is now December and Congress has yet to pass a budget for the year. I am even more worried on many levels by the effect of that failure to complete a constitutionally assigned duty now that I have read Stalled funding could hurt new nuke plants on Earthtimes.org. Even though…

A friend shared a link to a well written, fact-based opinion piece by Donald Jones published in TheStar.com titled No Future For Wind In Ontario. According to Jones’s by-line, he is a retired professional engineer with 35 years of experience in CANDU reactor design. Here are some quotes from the piece that are particularly important:…