I received an invitation by email to read and review a post on a blog called “TXCHNOLOGIST”. The invitation was well worded and inviting, most likely composed by a trained expert in public relations.

The subject post, titled Your Prius Won’t Save You: Questions for David Owen, Author of The Conundrum intrigued me. It was an interview of a New York Times journalist who has lived a jet setting lifestyle for many years. However, Mr. Owen has apparently realized that he and his pious, Prius-buying friends are not really doing much to forestall a coming economic collapse as fossil fuels become more and more scarce.

I have not yet read the book, but apparently his conclusion is that the only way we can survive is to learn to use a lot less energy. Here is the final exchange in the interview:

Txch: You end with a list of prescriptions for actually effecting change. Most them involve reducing consumption, but there’s little evidence we can do that. Do you have hope?

DO: The problem is so huge that it requires coordinated action by everybody. Say Americans decided we’re going to impose these really high taxes on fossil fuels. Unless the rest of the world does it too, we just make energy cheaper for somebody else. The Chinese or the French or the Germans. Somebody else will burn the stuff you decide not to burn.

How good would the human race being at leaving several centuries worth of coal in the ground while we shiver in our solar powered, very small houses. It’s hard to believe it would actually happen. There’s some point in the argument that I don’t know what the logical next step would be.

The post just begged for a comment. It seemed so hopeless and so apparently misinformed about the incredible store of energy in uranium and thorium that is just waiting to be more effectively put to use. Here is my contribution to the conversation:

If it were not for the fact that I have a deep understanding of nuclear fission energy and the politics that have surrounded nuclear energy since its discovery in the 1930s, proof in the 1940s and widening application from the 1950s-1980s, I would be a very depressed man.

Like David, I have lived a high energy consumption American lifestyle for more than half a century. I am well aware of the limitations of fossil fuel. I have studied every non-nuclear alternative sufficiently to realize that none of them have the potential to change anything regarding our access to energy.

My advantage, however, is that I spent most of the 1980s going to sea in submarines that ran for more than a decade on a mass of fuel that is just slightly more than my own body weight.

Pound for pound, uranium contains 2 million times as much heat energy as the best hydrocarbon, yet releasing that heat does not produce any SOx, NOx, fine particulate, mercury, CO, or CO2. The waste from fission is just as compact and concentrated as the fuel. Fission is not limited to using uranium; thorium is also available and is four times as abundant as uranium.

The primary reason we are not using fission more is that the people who hawk hydrocarbons LIKE their business. It is the source of massive wealth and political power, so they work very hard in many ways to keep the barriers to entry as high as possible for nuclear energy projects.

My message is that we really can have our wealth and spread it to many who do not have it today. We will get there by consuming a lot less material because fission gives us access to material with 6 orders of magnitude more energy for each unit mass. That energy density can sustain a substantial improvement in human prosperity for thousands of years.

We really can do more with less, but only if the less is a lot better at what it is supposed to do. The capability gap between hydrocarbons and fissionable material is analogous to the difference between vacuum tubes and modern microprocessors.

PS – As I was getting ready to post this, I noticed that this site is sponsored by GE. It is hard for me to believe that a company that has been involved in nuclear energy since its inception would employ a writer who allowed an interviewee to be so doomy and gloomy about energy supplies without even asking about nuclear fission.

I think my postscript identifies an important challenge and why I continue to believe that it is worth my time to “preach to the choir.” I am fairly confident that the interviewer and even Mr. Owen would not consider themselves to be opposed to nuclear energy. However, they have been conditioned to believe that it is not even worth discussing, perhaps because it is too “controversial.”

James Hansen has been warning the world since the 1980s about the risks we are imposing on ourselves. Unfortunately, not enough people have listened so we are continuing to increase the rate at which we are dumping CO2 into the only atmosphere we have. In the above video [no longer available], Hansen uses clear, unemotional… 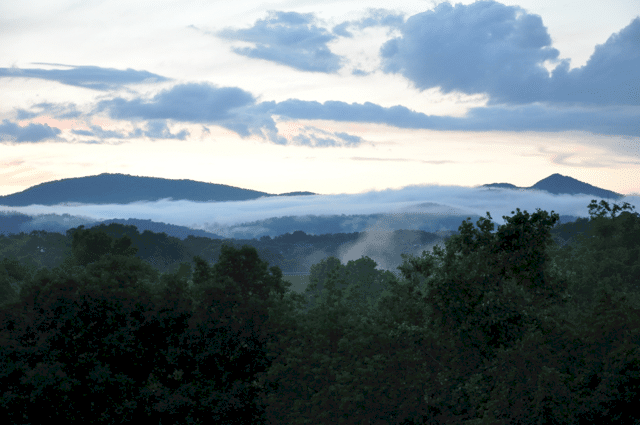 Atomic Insights LLC is a for-profit, tax-paying, publishing company based in the beautiful Blue Ridge foothills of South Central Virginia. Our service for customers is to produce and distribute accurate information about interesting or useful topics associated with atomic technologies. Among other topics we discuss atomic energy, the competitors to atomic energy, radiation, the risks…

On March 17, 2016 a group of sign-carrying, green tee shirt clad people gathered in downtown San Luis Obispo to show their support for the continued operation of the Diablo Canyon Nuclear Power Station. Organized by Californians for Green Nuclear Power and Friends of Diablo Canyon, the event was covered by reporters from several local…

An alternative title for this piece might be – Seeing the art that already exists in radioactive materials. Until today, I had never heard of James Acord, a sculptor who devoted more than 20 years of his life to sustained efforts to create art from radioactive materials. The first part of that struggle involved 12…

My continuing discussion with Robert Bradley at Master Resource provides an opportunity to concisely document information about energy market competition gathered over several decades. I hope you continue to enjoy it, but part of the reason for publishing it here is to add to a growing web log (blog) about the topic that may be…